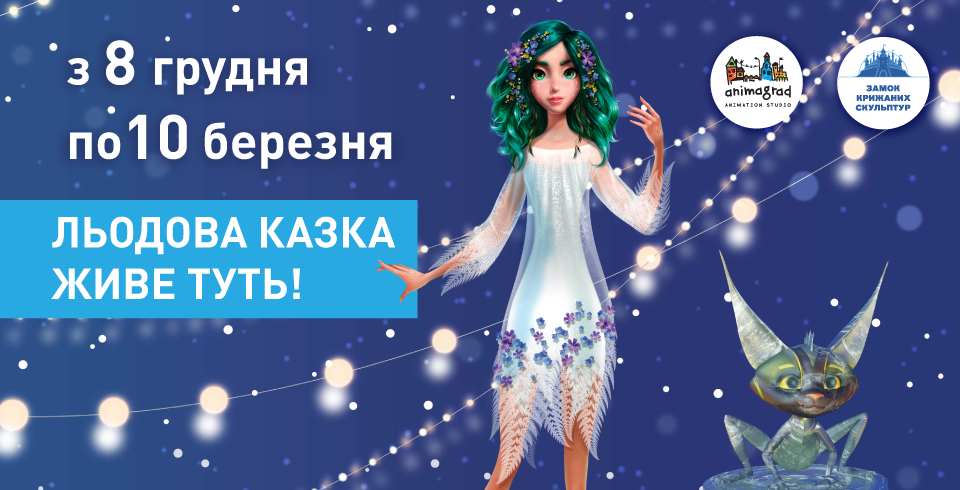 Starting from December 8 in Expocenter Ukraine, Winter Country at VDNG entertainment park opens for the fourth time. One of the main venues will be Ice Sculptures Castle inhabited by Mavka, Lucas, Swampy, Mila, Ruslan, Hamster Vinnytsky and other fairytale characters of animated films and series from Animagrad studio. These characters will be presented in the form of ice sculptures.

The Castle guests will be met by artfully produced ice characters from the most expected animated project in Ukraine, Mavka. The Forest Song. They are tender and kind Mavka, her loved one – talented musician Lucas, wise Forester, master of lakes and rivers Voda and funny Swampy. While active work on cartoon production is in full swing, its authors will familiarize children and adults with Mavka Universe and characters from different, often unexpected angles. And it is in winter that Mavka’s world characters will be made from ice, with main features and elements preserved.

The visitors are in for even more festive emotions from ice figures of well-known characters from The Stolen Princess, Ukrainian animated feature with the biggest box office. They include Mila, daughter of Kyiv prince; Ruslan, her fiance and wandering artist; evil sorcerer Chornomor; everyone’s favorite Hamster Vinnytsky; and other characters from the cartoon.

The sculptures dedicated to The Eskimo Girl, the quintessential winter product of Animagrad studio, will add even more winter ambience.

“Thanks to the partnership with Winter Country, well-known characters from Animagrad films will continue their adventures not only on screen but also as an incredible festive installation in Ice Sculptures Castle. We hope that both kids and adults will get a lot of great and positive emotions from visiting the entertainment park in VDNG this winter,” says Egor Olesov, director at Animagrad studio and producer of The Stolen Princess and Mavka. The Forest Song.

Just like Winter Country in VDNG, the exhibition of ice sculptures in the Castle will function during the whole time the park will be open, from December 8, 2018 until March 10, 2019.

Except visiting the entertainment zones, each one will have a chance to purchase branded souvenirs from FILM.UA Group projects. The merchandise will be sold at a special stall located in Gifts Corporation.

It is also important to know that a part of funds paid for visiting Ice Sculptures Castle pavilion will be transferred to the fund of long-term charity campaign Home for the Lynx. The campaign’s goal is to help the lynx and its cubs survive in Ukrainian forests. The collected funds will be directed at studying the population of Eurasian lynx in Polissya. The campaign organizer is Mavka. The Forest Song cartoon, with WWF Ukraine as its partner.  The funds are collected during the launch of all Mavka brand formats – books, shows, exhibitions, jewelry collections – and now Ice Sculptures Castle will also join this charity initiative.