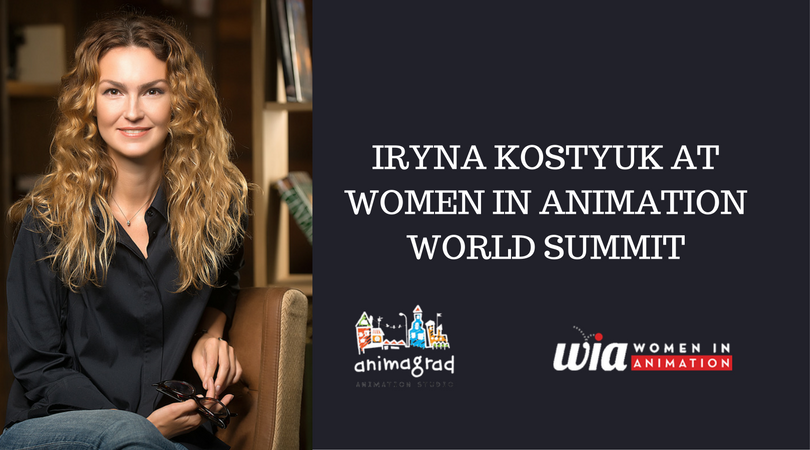 Iryna Kostyuk (FILM.UA Group), producer of animation feature Mavka. The Forest Song (Animagrad, FILM UA Group), will participate in Engaged & Emerging Filmmakers roundtable discussion in the framework of the first international conference WOMEN IN ANIMATION WORLD SUMMIT sponsored by Walt Disney Studios. Her interlocutors will be the representatives of international animation companies, and the discussion moderator is Bonnie Arnold, president of DreamWorks Animation.

“We are very proud to be considered engaged and emerging,” says Iryna Kostyuk. “This is exactly what we are trying to do, i.e. to create Ukrainian animation industry in an engaged and give-it-all way, to try to make it commercial and to bring it out into the international arena. And if these efforts of ours are noticeable enough to be invited to such a high-profile event, this means that we are going the right way and doing everything right.”

WOMEN IN ANIMATION WORLD SUMMIT is organized for the first time and will take place in Annecy on June 12-16 during the most prestigious international event for animators, ANNECY INTERNATIONAL ANIMATION FESTIVAL. The summit is sponsored by Walt Disney Studios. It is going to be the first event of such scale focused on professional work aspects and participation of women in animation industry; the organizers are Women in Animation and Les Femmes s’Animent international associations, which actively help and support women in animation industry, as well as French National Center for Cinematography and Animation (CNC), French Association of Drama Actors and Composers (SACD) and Hiventy, a leading provider of audiovisual technical services in Europe, plus the support of the festival itself and MIFA animation content market.

During the five days of the summit, the following discussions and roundtables are scheduled: “How to Achieve Gender Balance Among Management in the Animation Industry”, “How to Achieve Diversity in Plots”, “Role of Women in Chinese Animation Industry”, and other important and pertinent topics. The speakers are Julie Ann Crommett, vice president of a Walt Disney Studios department; Lindsay Nadler, head of HR at Walt Disney Studios; Junko Gotoh, producer at Warner Brothers Animation Group; Karen Dufilho, executive producer at Google Spotlight Stories, and others.

The international festival in Annecy has been around for more than half a century. During this time, it has become an iconic event in the animation world, and its Grand Prix, Cristal d’Annecy, is now equal in its importance to an Academy Award.

On June 15, the stand presenting Ukrainian animation industry will premiere the first teaser of an animation feature Mavka. The Forest Song for the European professional audience.

FYI: Mavka: The Forest Song is a full-length animated feature produced by Ukraine-based Animagrad (FILM.UA Group). It is currently at the concept stage of development. The film is inspired by a play of the same name by Lesya Ukrainka, as well as by various Ukrainian legends and cultural traditions. The film’s production crew includes experts from leading ethnography institutes: the Ukrainian Studies Center at the Taras Shevchenko National University of Kyiv, the Ivan Honchar Museum, and the Ukrainian Fashion Museum. The experts are there to ensure the authenticity of the Ukrainian myths and legends, religious beliefs, rituals, and visual culture translated into the singular animated world of Mavka. And the world-renowned group DakhaBrakha has already committed to creating the film’s soundtrack.In September 2016, the animated feature Mavka: The Forest Song won the ninth contest held by the Ukrainian State Film Agency and was awarded state financing in the amount of 30% of the film’s total budget. Mavka: The Forest Song is scheduled for release in Ukraine in 2019.