Today the video has become available at all official resources of Animagrad studio and Mavka. The Forest Song animation feature, as well as on the official YouTube channel of FILM.UA Group

Though there are still almost two years left till the animation feature premiere, the first teaser to Mavka. The Forest Song will appear on the screens of Ukrainian cinemas in late July. This non-standard approach was conditioned by significant interest of wide audience in the project, which is now in the development stage. 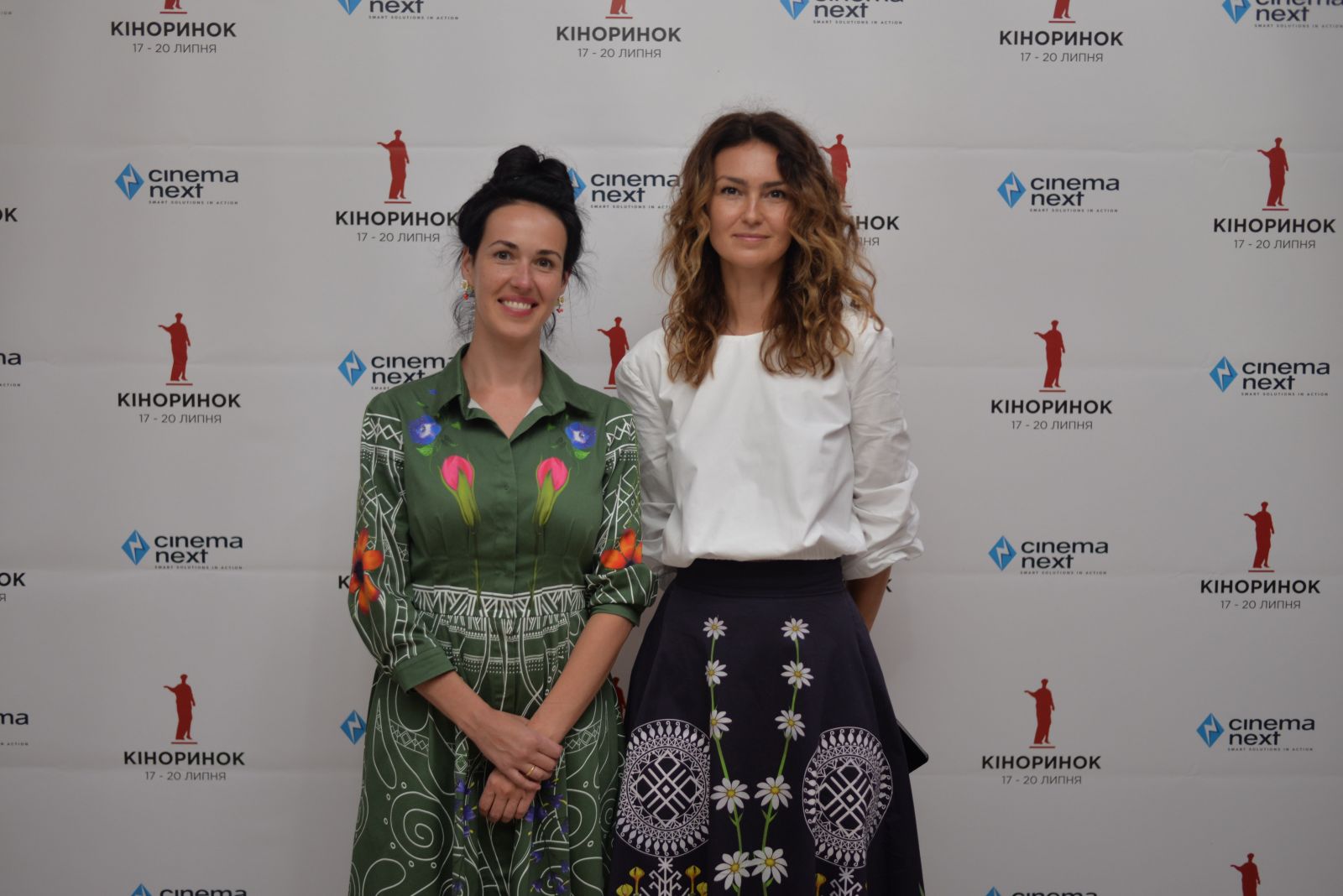 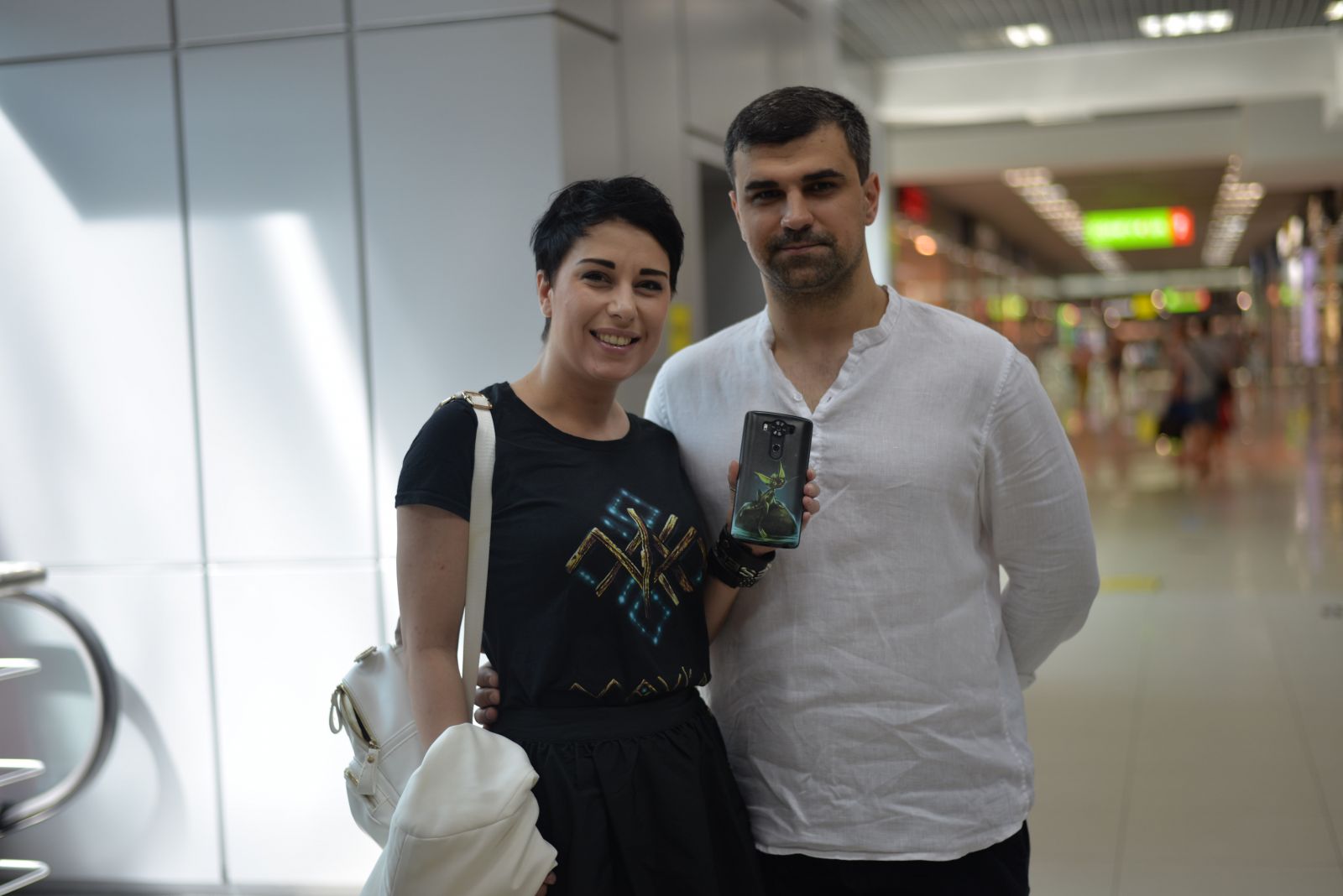 “Our teaser is more about ambiance than plot. Its objective is to immerse the audience in the unusual forest world of Mavka, to let the viewers meet the protagonist, to show her magic connection with nature and demonstrate Mavka’s Willow. We’ll also denote several unique features of the project: Mavka’s tattoos in the form of pagan runes, which illuminate when she hears Lukash’s music; a unique outfit created by nature itself (but in reality carefully thought out by Olga Navrotskaya) and, of course, music from ‘DakhaBrakha’ based on a Ukrainian folk song, a vesnyanka (a song calling the spring in). This soundtrack is among the main components of our teaser; it helped us a lot with demonstrating the authenticity and spirituality of our future project. And so that the audience knows the film will have a light side to it – we’ve inserted a little gag with Swampy,” says Iryna Kostyuk, project producer.

In honor of the premiere, the open terrace of M1 Club Hotel in Odessa hosted a private party gathering well-known media figures and celebrities: head of Ukrainian State film Agency Philip Illienko, artists Masha Shubina and Illya Chichkan, designers Liliya Pustouvit and Liliya Litkovskaya, tv-hosts Tala Kalatay, Anna Bezulik, Katerina Osadchaya, president of OIFF Victoria Tigipko and other friends and partners of FILM.UA Group came to see the teaser to ‘Mavka. The Forest Song’. They became its first audience in Ukraine, and the Mavka’s team was really excited to hear their reactions.

“We have already done a European presentation of the teaser in Annecy and got a lot of positive feedback from the international audience. But showing it here, at home, is completely different – this means different expectations from us as the team and different engagement of the audience with the protagonist’s image, her world, and the film’s music. And goosebumps during the screening are not just a result of Animagrad’s work. This is the voice of blood – we all needed a project like Mavka,” says Anna Eliseeva. 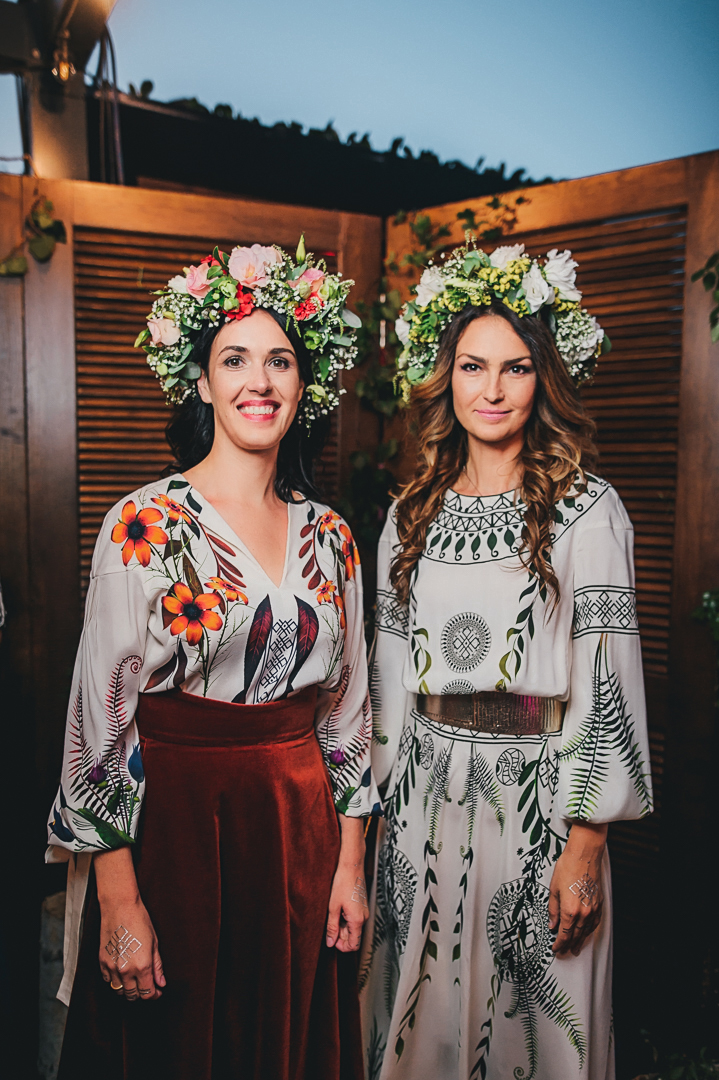 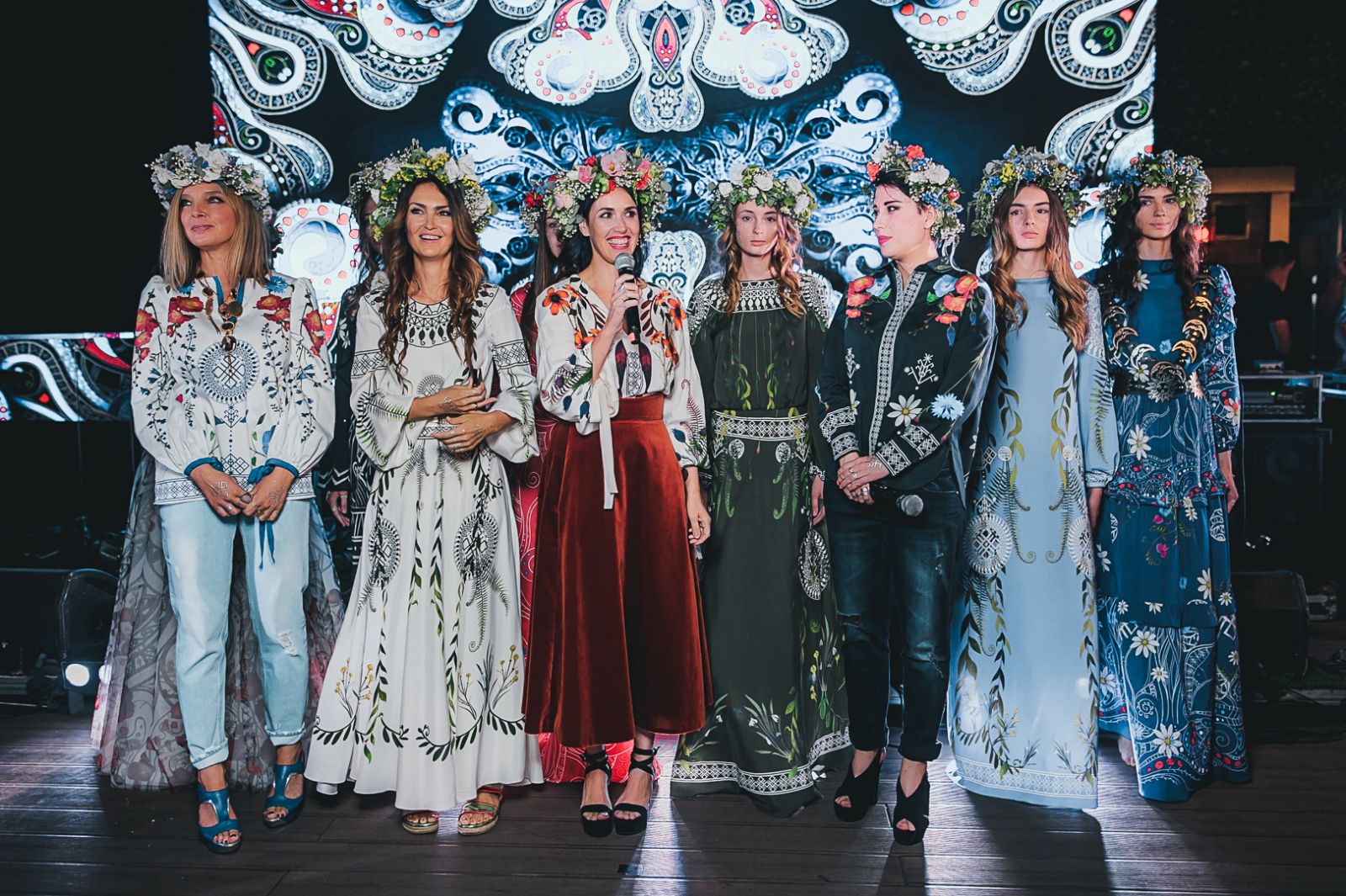 Surprises prepared by the team helped the guests to feel involved in Mavka’s Universe: everyone could experience national authenticity and “try out” Mavka style thanks to temporary tattoos replicating runes from the film and handmaid wreaths made of fresh flowers. 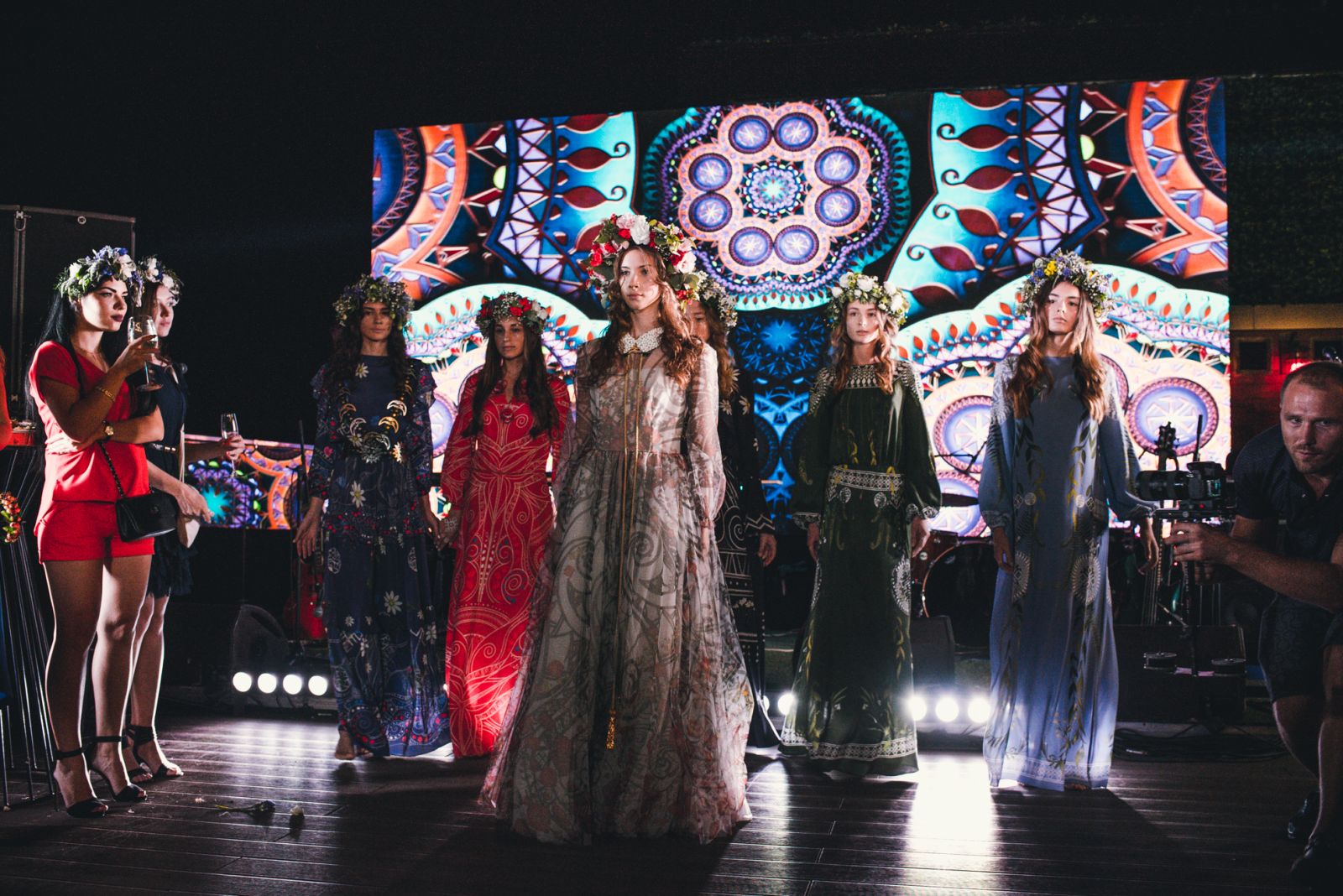 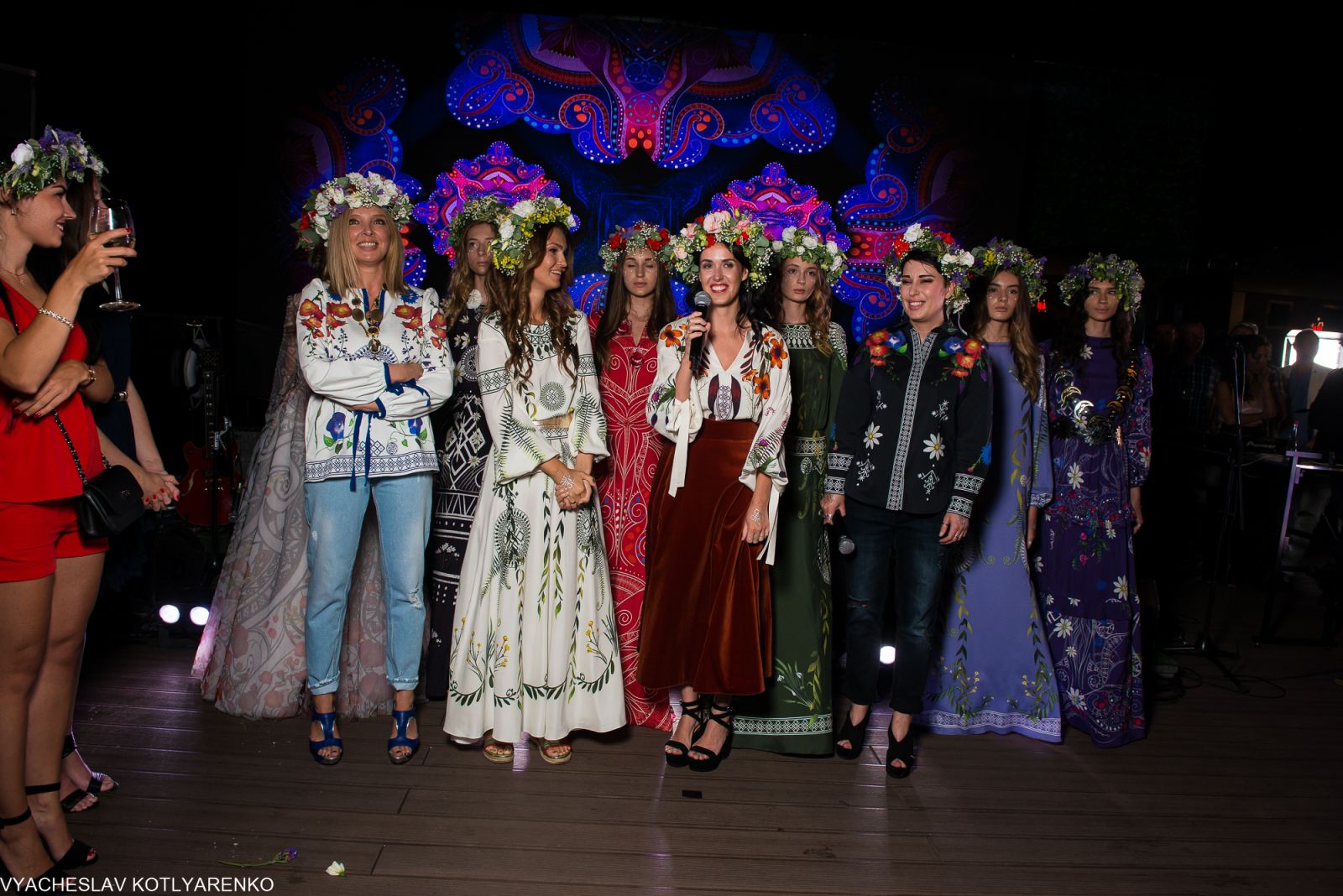 Olga Navrotskaya, costume designer for ‘Mavka. The Forest Song’, presented the first official capsule collection titled MAVKA to the Ukrainian audience. Feminine silhouettes of silk dresses and blouses are decorated with flowers and ornaments, which were used in Mavka’s outfit in the  teaser and will appear in the film itself. “Our Mavka is an ancient and mystical creature; she can be changeable like nature itself. She is day and night, flower fields and green forest, fire, and water. In my dresses, I tried to reflect the feeling of Mavka’s world and image through the combination of fairy tale ornaments and floral elements. This is how six dresses, six moods, and states appeared,” said Olga Navrotskaya, explaining the concept of her new collection. 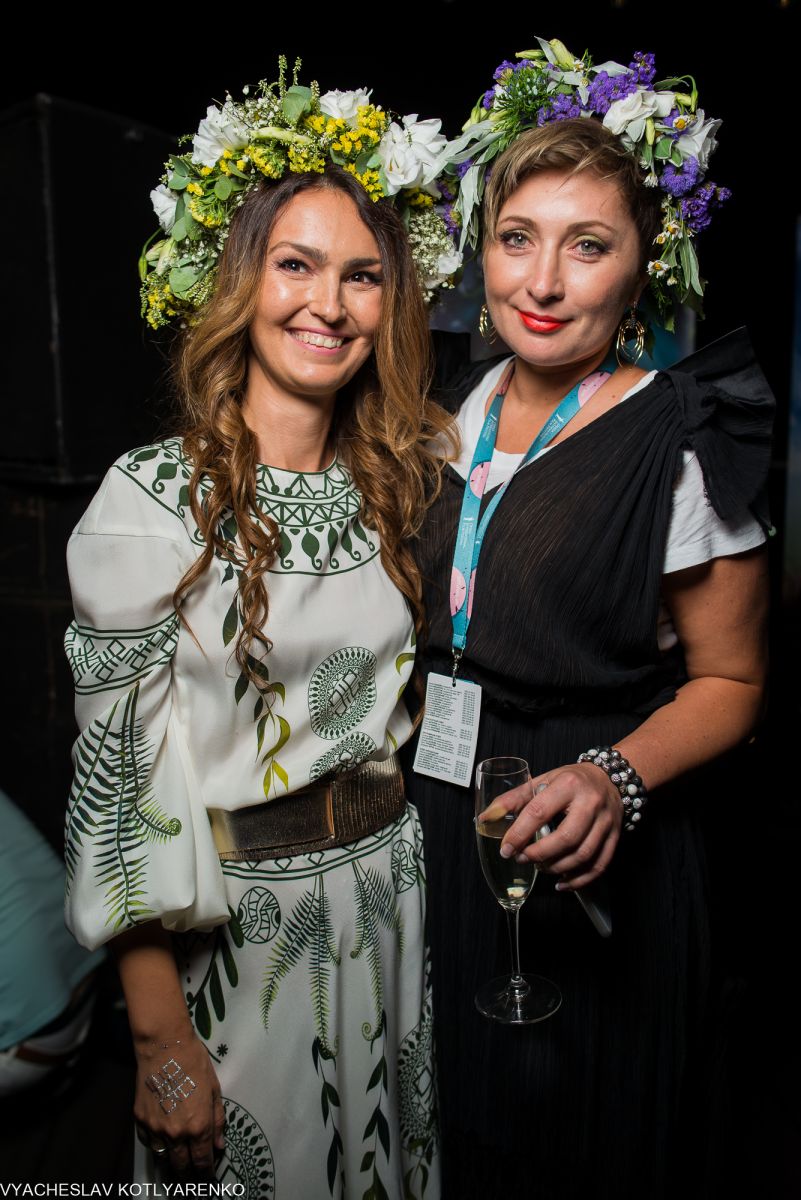 Olga created the first outfits from this collection for film producers Iryna Kostyuk and Anna Eliseeva. These memorable looks have repeatedly helped the project team to successfully present the feature film at international pitchings and film markets, and it is those outfits that the producers and Sasha Ruban, film director, were wearing that night. They also presented the teaser to the guests. 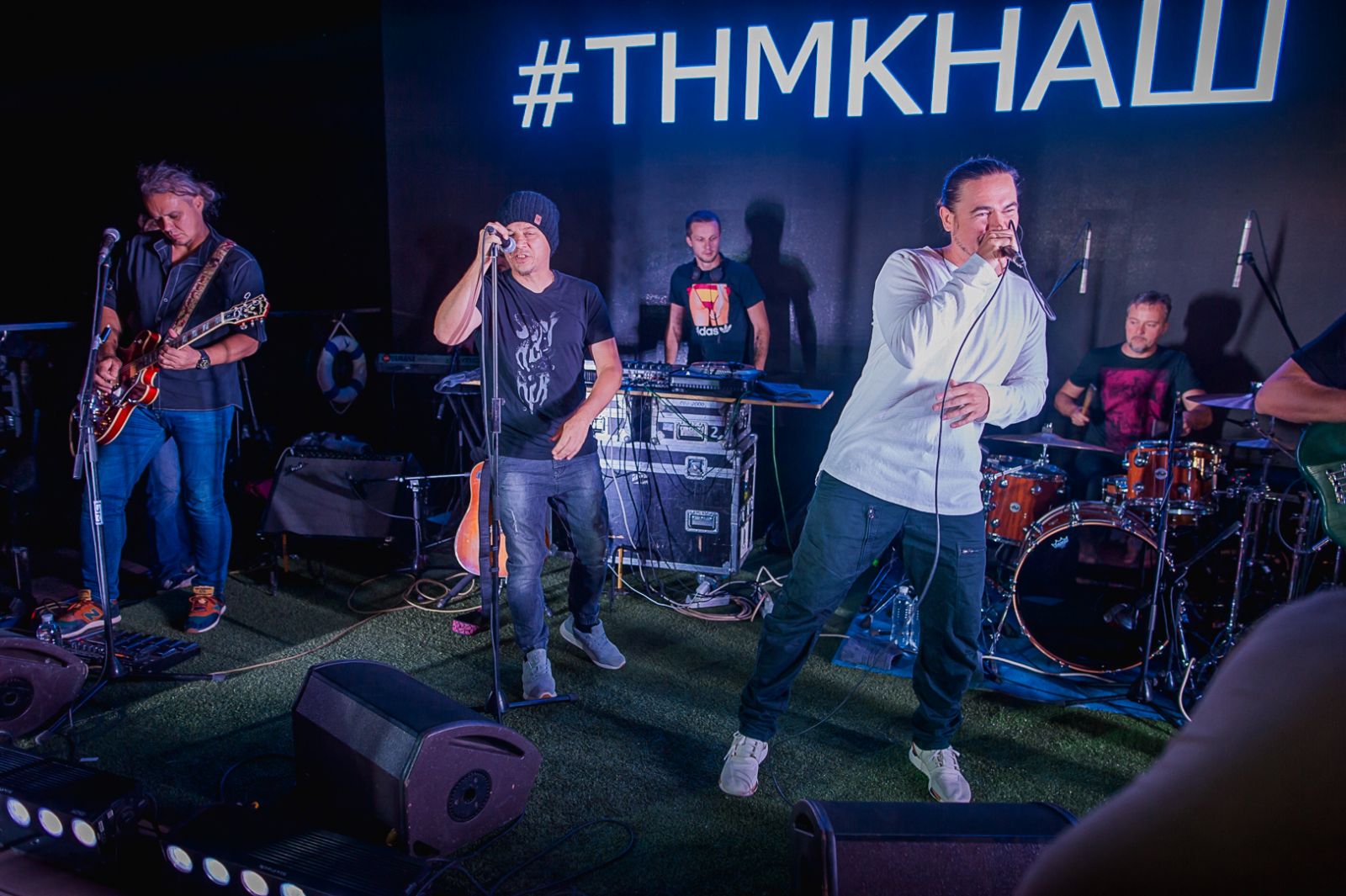 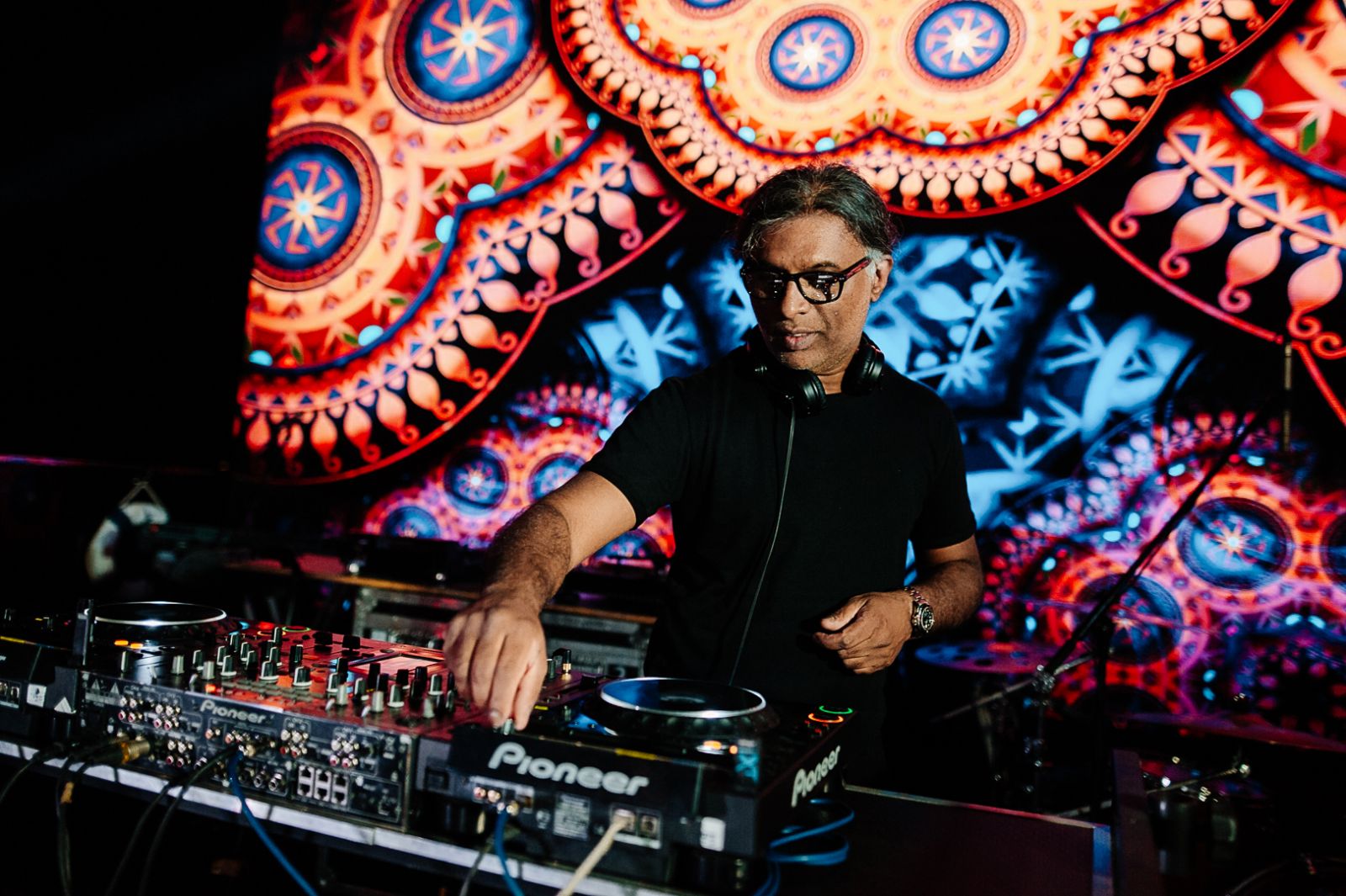 But there were more surprises and premieres to come. After an energetic performance by Fagot and TNMK band dedicated to the nearest theatrical release from FILM.UA Group, a fantasy film The Stronghold (produced by Kinorob), the stage was taken by DJ Ravin, a favorite with French audience and a resident of Buddha Bar, an iconic Paris club. In the beginning of his set, he played a remix of the main music theme in Mavka, a melody of Lukash’s sopilka. “This track has touched me due to its emotionality and ethnical motives, with all these flutes and unusual rendition. I am really excited, this was a challenge for me, but I accepted it with pleasure,” said the DJ. 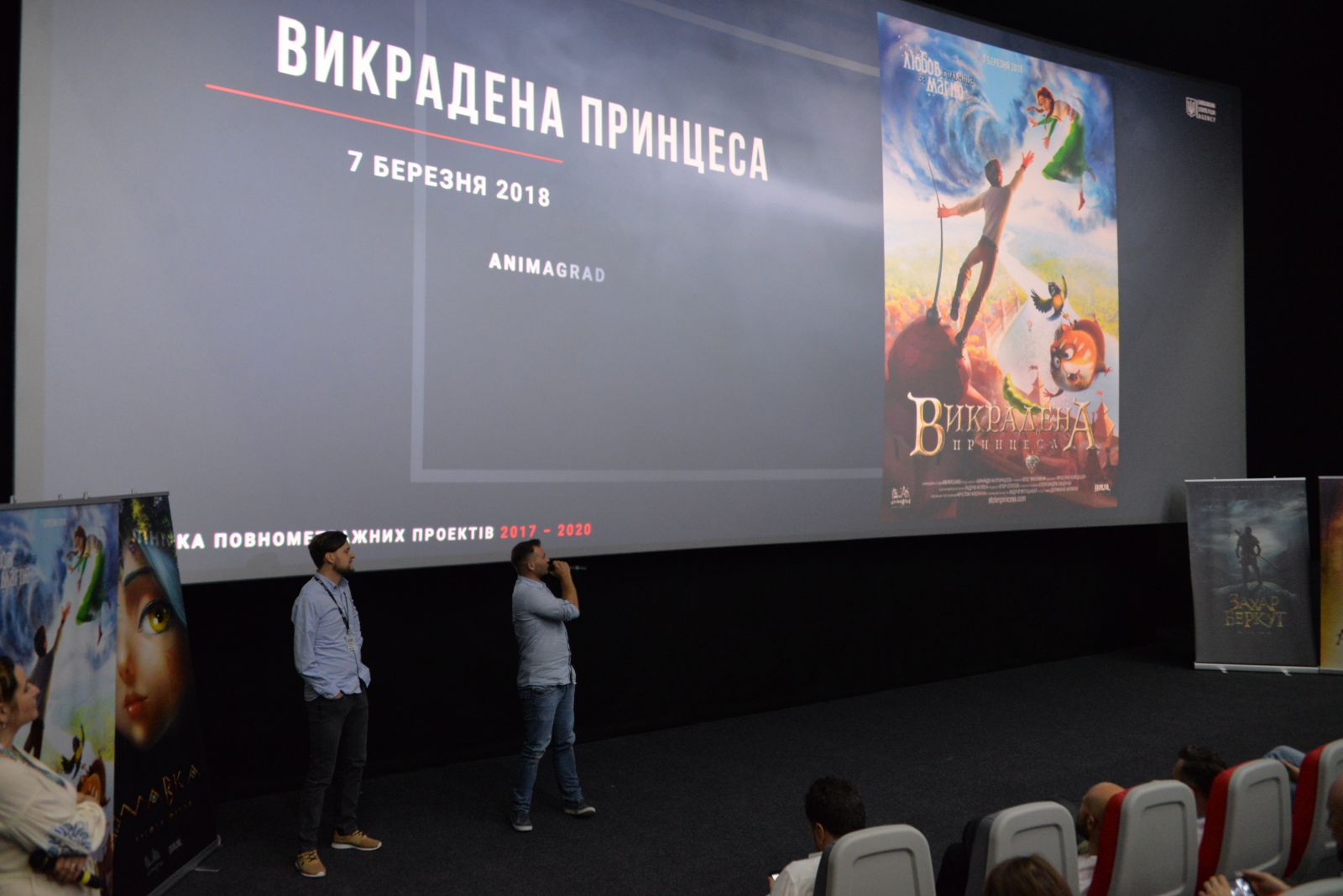 “Mavka’s teaser official premiere became not just a long-awaited event for the wide audience but also a very important step in creative self-realization for Animagrad studio team, which now actively works on other projects, including its first animation feature The Stolen Princess,” says Egor Olesov, Animagrad CEO. “Animation quality, memorable visuals, strong creative spirit and – the main thing – the best Ukrainian artists and animators believing in what they do – all this allows us to hope that Ukrainian animation will soon be on par with the top global projects!”

The international version of the teaser is available on FILM.UA Group YouTube channel. The Ukrainian version is available for viewing on the Facebook page of ‘Mavka. The Forest Song’; a short version has been prepared for the Mavka’s Instagram account.

Watch the video about the teaser premiere party of the Ukrainian animation feature film «Mavka. The Forest Song» on Animagrad`s YouTube channel.

FYI: ‘Mavka. The Forest Song’ is a full-length animated feature produced by Ukraine-based Animagrad (FILM.UA Group). It is currently at the concept stage of development. The film is inspired by a play “The Forest Song” by Lesya Ukrainka, as well as by various Ukrainian legends and cultural traditions. The film’s production crew includes experts from leading ethnography institutes: the Ukrainian Studies Center at the Taras Shevchenko National University of Kyiv, the Ivan Honchar Museum, and the Ukrainian Fashion Museum. The experts are there to ensure the authenticity of the Ukrainian myths and legends, religious beliefs, rituals, and visual culture translated into the singular animated world of Mavka. And the world-renowned group DakhaBrakha has already committed to creating the film’s soundtrack.In September 2016, the animated feature ‘Mavka. The Forest Song’ won the ninth contest held by the Ukrainian State Film Agency and was awarded state financing in the amount of 30% of the film’s total budget. ‘Mavka. The Forest Song’ is scheduled for release in Ukraine in 2019.