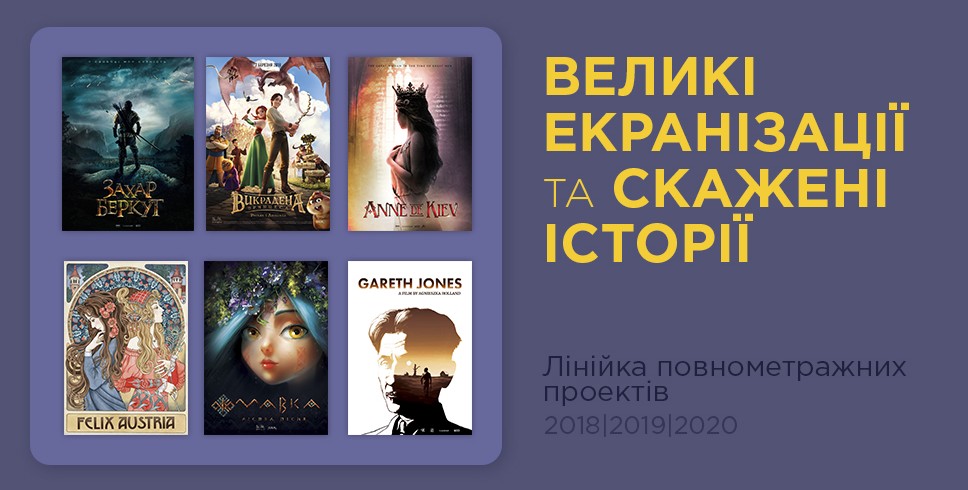 Film market participants and accredited press were presented with seven feature films, most of which are screen adaptations of Ukrainian and world literature. The line included animation films The Stolen Princess and Mavka. The Forest Song (produced by Animagrad), historical films The Rising Hawk, Gareth Jones and Anna de Kiev (produced by Kinorob) and feature films Felix Austria and Crazy Wedding (produced by FILM.UA Group).

During the presentation, there was a premiere of the first official trailer for the animated film The Stolen Princess. On December 14, the trailer has published on the digital platforms of the project, FILM.UA Group, and Animagrad, and starting from December 21 it will be available in Ukrainian cinemas as well. Film market participants also found out about the marketing strategy and plans for the film’s promotion campaign; besides, several new episodes with the total timing of 15 minutes were shown. The release of The Stolen Princess film in Ukraine is planned for March 7, 2018; the national distributor is UFD. The rights to Ukrainian film distribution have been pre-sold to more than 30 territories, including China, South Korea, France, Poland, Bulgaria, Germany, MENA and Latin American countries. 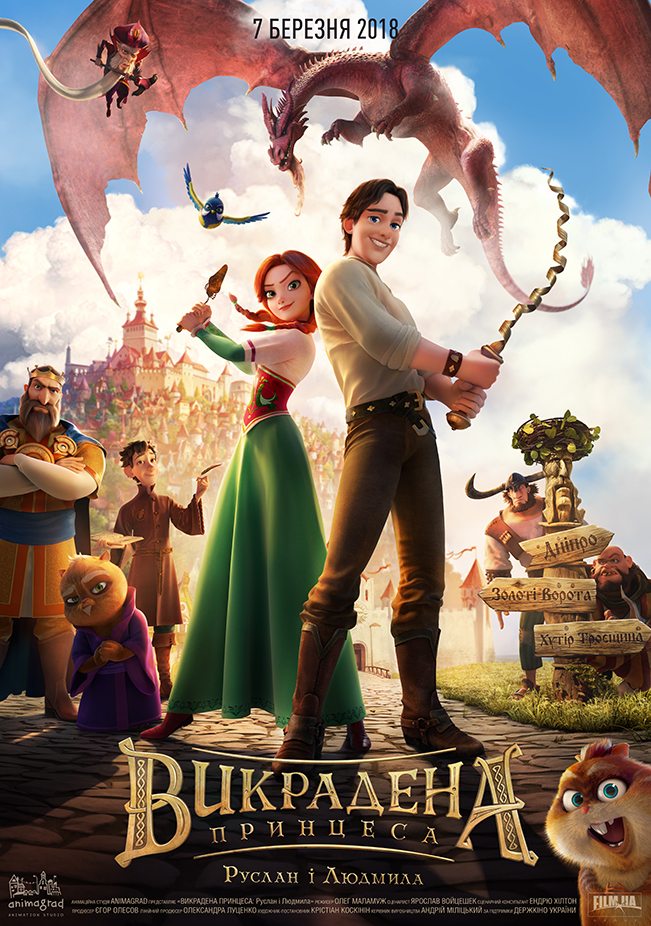 The team of the second feature project from Animagrad, animated film Mavka. The Forest Song, also presented new materials at the film market. The event guests saw an exclusive art video where the project’s creative team introduced the concepts of new characters and locations for the feature. These new materials from the film will also be seen by the participants of co-production forum at the Be Film Festival in Belgium, where the producers of the project Iryna Kostyuk and Anna Eliseeva were invited to present it. 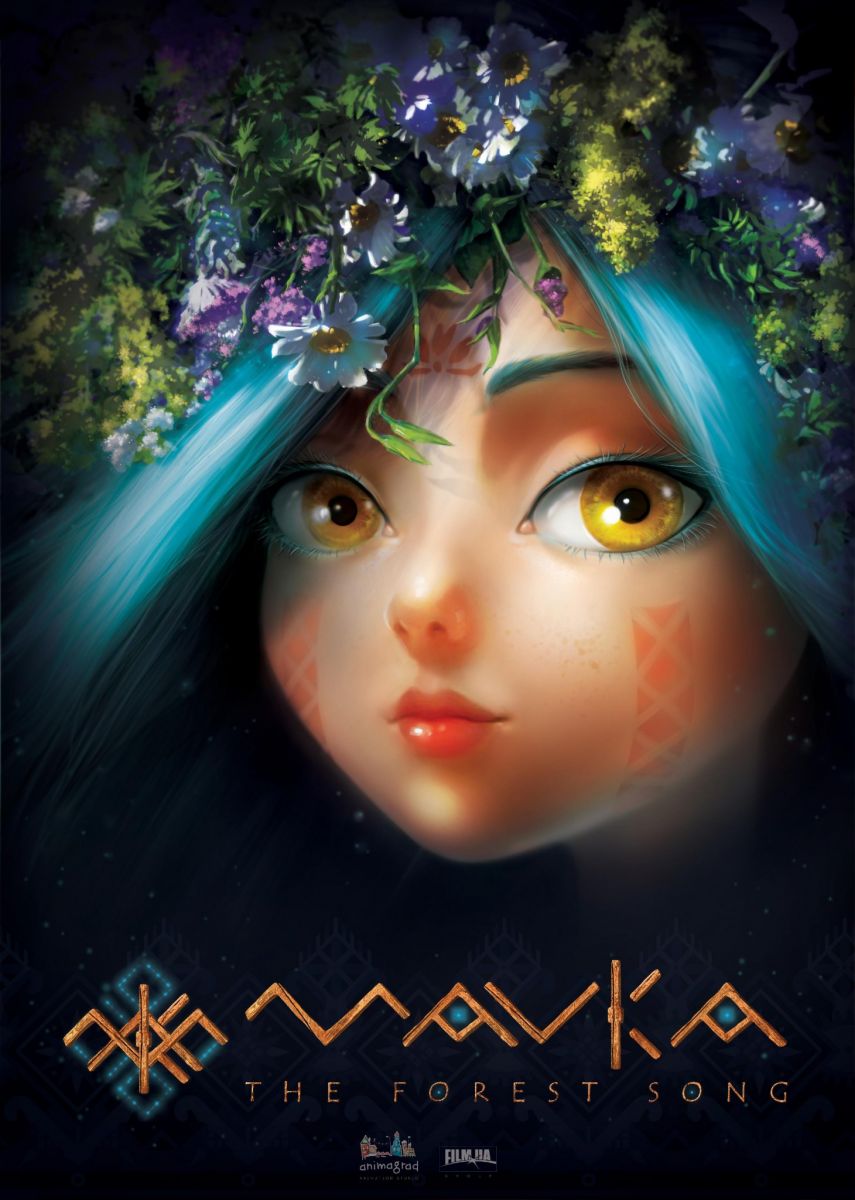 FYI. Founded as part of the FILM.UA Group in 2012, today Animagrad Studio is one of the leading animation production companies in Eastern Europe. Its portfolio includes a number of successful projects in 2D and 3D animation technologies, and now the studio develops feature and series animation projects designed for the international market.

The Stolen Princess is the first animated feature film made for the Ukrainian and international distribution in the production line of the animation studio Animagrad. The film is now under production, but the broadcasting rights for it are already pre-sold to more than 30 territories – China, South Korea, France and French-speaking countries, Poland, Bulgaria, Israel, Germany, Austria, Switzerland, Lithuania, Latvia, Estonia, as well as countries of the Middle East and North Africa. “The Stolen Princess” won the 9th State Film Agency Competition, the amount of state funding is about 20% of the total budget.

FYI: Mavka: The Forest Song is a full-length animated feature produced by Ukraine-based Animagrad (FILM.UA Group). It is currently at the concept stage of development. The film is inspired by a play of the same name by Lesya Ukrainka, as well as by various Ukrainian legends and cultural traditions. The film’s production crew includes experts from leading ethnography institutes: the Ukrainian Studies Center at the Taras Shevchenko National University of Kyiv, the Ivan Honchar Museum, and the Ukrainian Fashion Museum. The experts are there to ensure the authenticity of the Ukrainian myths and legends, religious beliefs, rituals, and visual culture translated into the singular animated world of Mavka. And the world-renowned group

In September 2016, the animated feature Mavka: The Forest Song won the ninth contest held by the Ukrainian State Film Agency and was awarded state financing in the amount of 30% of the film’s total budget. In March 2017, the animated feature was the first to represent Ukraine at the animation forum Cartoon Movie in Bordeaux, where it was highly appreciated by the European professional audience. And in May of the same year, the producers presented the project with great success at the largest international animation business forum Cartoon 360 in Barcelona.

Mavka: The Forest Song is scheduled for release in Ukraine in 2020.